Nollywood actress turned pastor, Eucharia Anunobi revealed that being a pastor doesn’t stop her from acting promiscuous roles in movies.

The actress said this while reacting to reports that she has stopped acting, stating that her individuality is different from whatever character she portrays in a movie.

Speaking to the Punch, she said;

“Some people think that when you become a minister of the gospel, you are not supposed to have a career. However, being a minister does not stop you from working.

“Since I started acting, I have never taken a break and I am not going there. I think what caused this misconception is that because of the activities of pirates, many movie producers were not publicising our works. So when people don’t see you in movie adverts, they think that you are no longer on the scene.

“As a matter of fact, I just got back from set. Even as a pastor, I can still act a movie like Glamour Girls because my individuality is different from whatever character I portray in a movie. I always tell people that undue exposure of the body that does not add to the story doesn’t make sense.

“I watch some movies where people bare skin for no plausible reason. Being a pastor does not stop me from acting any role, as long as there is no undue exposure of my body. I gave my life to Christ in 1997; so, even at the peak of my career, I was a born again.” 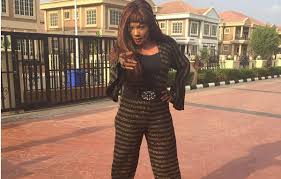 “Can He Carry My Load?” Nollywood Regina Daniels Recounts How A Boy Selling Cherry Asked Her Out