See Photos Of The Lady With The 62 Inch Butt, Check Her Recent Look Without Her Butt Implants

Courtney Barnes has taken turns to become a celebrity by simply having big butts. The 32-year-old who got a butt injection at the age of 22 shared her story with botched.

Courtney claimed she was just a regular student until her quest for money made her become a stripper at a club. Courtney claimed in an attempt to earn more than what she did on her first day, the model seeks the help of a friend who gave her a very bizarre idea about getting an injection in her butt. 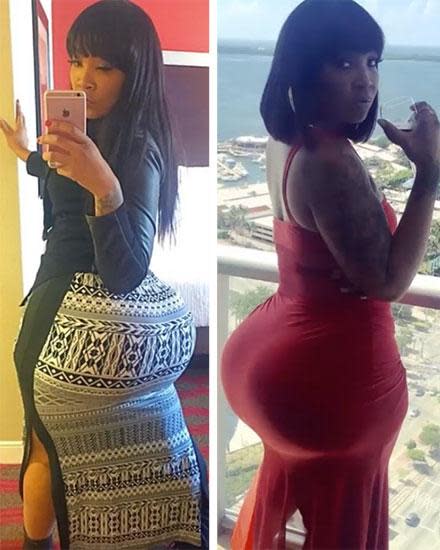 Courtney who was disappointed by the little she earned that day decided to take a step even if it’s dangerous to earn more and such she listened to her friend and went for her first-ever illegal injection.

Courtney was soo happy with her look and the money she was making at the strip club overnight that she went for a second injection. She claimed men paid attention to her and she had many customers.

She saw how good things were at that point in her life and hence she decided to go for her third injection. By this time Courtney was embracing her new looks and thus decided to post more pictures of herself on social media.

People were wowed with her looks and thus became very popular earning over 1 million followers on Instagram. She had trolls though but she was receiving more attention in public and on social media. Eventually, she just quested for more and decided to go on a fourth injection.

Mompha takes a break from social media over...

“Allow Your Man To Cheat In Peace If...

Scenes from engagement ceremony of Tobi Bakre and...